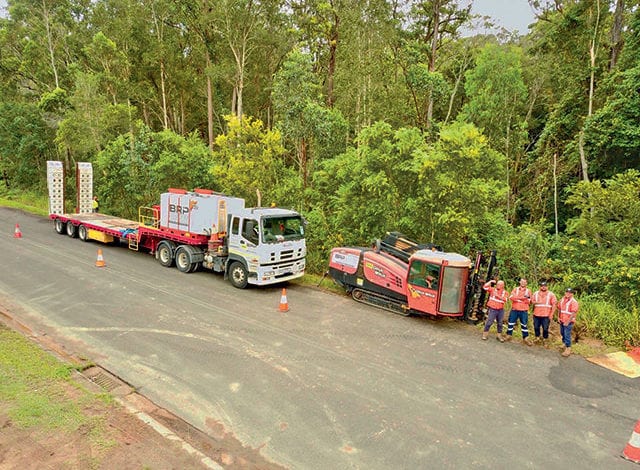 BRP Industries offers a range of specialised solutions and credits the Ditch Witch AT30 directional drill, which it purchased from Ditch Witch CEA, to its ongoing drilling success.

BRP Industries Owner and Director Brad Phillips says the company used to operate a JT20 but, once more rock work projects became available, the team wanted something more versatile – such as the all-terrain.

Mr Phillips purchased BRP Industries’ first AT30 four years ago due to its capabilities in any ground condition, allowing the company to work all over Australia.

“The 30’s are good for anywhere from the sand we drill in Western Australia to the bluestone rock we drill in Canberra,” says Mr Phillips. “Currently, we’re drilling in basalt at the moment in Nerang on the Gold Coast.”

“It’s the right technology that suits the work that we do.”

Mr Phillips says BRP Industries continually has all three drills in use for a range of NBN, power, water and gas projects all over the country.

Due to the small footprint of the machine, Mr Phillips says it’s quick to set up, get the work done and then quick to pack up, making the compact drill suitable for all kinds of work.

“The ground can change quickly from hard rock and soft rock in a matter of metres, so the all-terrain system allows you to always keep going.”

When choosing a supplier, Mr Phillips says the initial decision to use Ditch Witch CEA was because other competitors did not have the right technology.

“The Ditch Witch technology was superior for what we were doing as opposed to other things that were on the market,” says Mr Phillips.

Now, BRP Industries continues using Ditch Witch CEA not only for its supply of forefront technology, but its impeccable service.

“The service is unmatched with anything that we do,” says Mr Phillips.

“The guys who are specialised in this equipment, you give them a call and they are more than happy to help. They will talk the guys down on the field through it or, alternatively to that, they’ll get a crew out as soon as possible to fix the equipment.”

Mr Phillips says Ditch Witch CEA is always there to supply technical knowledge of the machine and supply any additional things BRP Industries may need for the drill.